September Floods (or, bullets whizzing by my head) 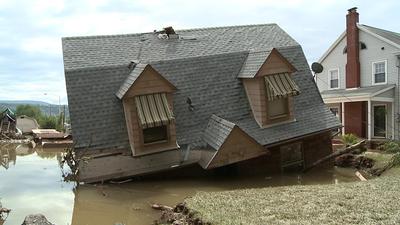 After what has happened in Northeast and central PA over the past couple of weeks, this could have been my house. It's not. But, it very easily could have been.

To backtrack a little, first came Irene, which dumped copious amounts of rain in our area in late August. Irene also came with a lot of wind, that blew down a lot of trees, that caused a lot of people to lose power. Ten days after the storm ended, there were STILL people in rural parts of Luzerne County that hadn't had their power restored.

We (and by "we" I mean the TV station where I work) might still have been talking about Irene on Day 11, except that's when Lee arrived with not so much wind, but with even more copious amounts of rain to our area and to New York State.

We knew from the start that Lee would cause problems. The original scenario called for central PA to get the brunt of it, with the west branch of the Susquehanna going above flood stage. It looked, at least initially, as though the north branch, which runs directly behind my house, would crest around 30' at Wilkes-Barre. A crest of that height means flooding in some of the low-lying areas - Shickshinny, West Pittston, West Nanticoke, Plainsville - but poses no danger to communities protected by the levee - Wilkes-Barre, Kingston, Forty Fort. The levee also runs directly behind my house, so I felt safe.

At first, that scenario appeared to be correct. On Wednesday, there was rain and the threat of flooding. We focused our coverage on how communities such as Bloomsburg, Danville and Lewisburg would prepare for possible flooding.

Then came the first bullet: the projected crest at Wilkes-Barre was raised from 30' to 38'. In one shot! Holy crap! That meant more flooding in more communities along the river and, it came dangerously close to the 41' of protection offered by the levee. Suddenly, I didn't feel so safe. However, the last time a crest that high was predicted was 2006. That time, officials made people in areas affected by Agnes in 1972 (me) get out, but the crest fell below projections at 34'. I was hoping for a similar result this time. They might say 38', but the actual crest would be 36' or something. So, even though I was worried, I wasn't WORRIED.

But, the rain kept falling and the projected crest kept rising. By the time I woke up Thursday morning, an evacuation order was in place. A guy from work called to offer assistance in moving my belongings to higher ground. At first, I refused. Then, the crest was raised to almost 40'. Now I was WORRIED! I called him right back.

By the time I got to work a little after noon on Thursday, we were in non-stop coverage. There was already severe flooding along the west branch and in communities north of Wilkes-Barre which had no levee protection. The projected crest was now 40.8' sometime early Friday morning. But, as Thursday night progressed, it seemed that the river wasn't going to go that high. It's rapid rise seemed to level off slightly below 39'. Although there had not been an official announcement that the river had crested, the rain had stopped and the worst appeared to be over. I went to the hotel for the night feeling confident that my house was safe. That feeling was confirmed in the morning when I woke up to word that the river at WB had crested a few hours earlier at approx. 38.8'.

Then came the second bullet: That first number was wrong. Oh, the river had crested all right - at 42.66' - higher than Agnes! This was no longer just a bad flood. This was an historic flood!

The announcement from Luzerne County officials came at 1 p.m. Friday. By that time, we had ended our round-the-clock coverage. But, we had just wrapped up the noon newscast and planned hourly updates until the next news cycle began at 4 p.m.

We took the news conference live at the beginning of our 1 p.m. cut-in. The cut-in was supposed to last 5-10 minutes. I think it lasted 45. We were all just stunned. Officials said a river gauge had malfunctioned*, probably because of all the water pressure, and the river had crested four feet higher than originally thought! Officials quickly added that the levee actually protects up to 44', not the 41' that many people (including me) believe. So, the crest had happened, it was just a lot higher than anyone thought.

I went to the news director and asked if we should resume wall-to-wall coverage based on this new information. I said I thought we should. He countered with an analogy, saying that learning about the higher crest after the fact was rather like being shot at one day and learning the next day how close the bullet really came. But, it doesn't change the fact that the bullet was fired the day before and that it missed. So, we held off on going wall-to-wall again, but certainly used the new information to emphasize the seriousness of the situation. If nothing else, it meant that there would be worse-than-expected flooding in many communities, and it meant that people affected by the evacuation order (me) would be out of their homes longer.

The devastation caused by Lee is massive. The house pictured above is in Bloomsburg. The house is not along the Susquehanna. It's in another part of town where Fishing Creek overflowed its banks. Many of the creeks in the area also flooded because the river was so high that the creek water had no where to go. Bloomsburg is a mess, Danville took a hit, communities in Sullivan, Bradford, Susquehanna, Lycoming, Wyoming, Schuylkill and Luzerne counties are devastated. For the most part, only the Poconos, which took a big hit from Irene, were spared.

So, anyway, back to the picture at the top. It's not my house, but it's a lot of people's houses. And, if the levee hadn't held, and if the crest had been maybe even a foot higher, it could have been my house, too.

The bullet may not have hit me - this time - but now that I know how close it came, I'm a little freaked out about what could happen next time some storm decides to stick around for a while. The third time may not be so lucky.

*Update on 9/18/11: As it turns out, the river gauge didn't malfunction. It simply was unable to read anything higher than 38.8'. Apparently, no one in Luzerne County knew this. They believed it would measure up to 41'.

Hmmmm. I wonder: could construction (paving) and deforestation mean that, over the decades, once-in-a-lifetime storms will become more frequent? Less water-absorbing exposed land and fewer water-absorbing tree roots will mean more water running off into creeks and streams that feed rivers like the Susquehanna.


This comment has been moderated by the blog owner