How Much Longer Can This Go On?

Two days into the start of testimony at Jerry Sandusky's trial and, from someone watching/reading coverage from home, things are not looking good for the defense. If the defense strategy is to make prosecution witnesses, including alleged victims, look like liars, they don't appear to be succeeding.

After opening statements yesterday, the prosecution called alleged Victim #4 as its first witness. He's now in his late 20s, but described being showered with gifts and molested by Sandusky some 15 years ago. There were even love letters and a sort of contract written by Sandusky to the alleged victim. He testified that he didn't tell anyone about the abuse because he liked the attention, which included trips to at least one Penn State bowl game. He said another reason he didn't come forward is because he thought he was the only one. The man held up under cross-examination, denying any profit motive for coming forward now.

Today, on Day 2 of testimony, the teenager known as Victim #1 was the first to testify. He's the young man from Clinton County who finally got the attention of law enforcement when he reported his claims against Sandusky. His allegations are what started the whole investigation that has now led to charges against Sandusky and to great upheaval at Penn State.

Whereas Victim #4 was solid and steady on the stand, the younger Victim #1 reportedly sobbed during most of it, pausing often to gather the courage to go on. He described how Sandusky started with kisses and worked up to oral sex, even saying to the boy one time, "Now it's your turn." The boy described how, after a while, he tried to hide from Sandusky. He said when he told a high school official what was going on, that person didn't believe him because Sandusky had "a heart of gold." The boy and his mother went to the county, and that's when the ball started rolling.

On cross, the defense didn't score any points when the boy tearfully said that testifying was very difficult and asked Joe Amendola why he kept asking the same questions over and over.

The next witness brought the surprise of the day. The prosecution called former Penn State Quarterbacks coach Mike McQueary. 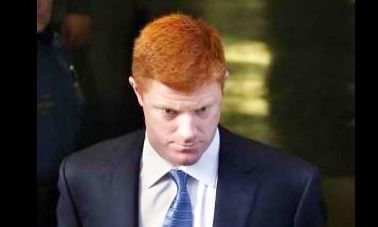 He's the one who claims to have seen Victim #2 (who has yet to be identified) being molested by Sandusky in 2001 in a building on the Penn State campus. It's McQueary's story that led to the charges against two Penn State officials and the firing of Joe Paterno and university president Graham Spanier. McQueary was scheduled to testify but wasn't expected to do so until later in the week.

McQueary confidently told his story of what he saw and explained any discrepancies (i.e. the initial grand jury report said the incident happened in 2002; that has now been changed to 2001). He also stated that he wants to coach football at Penn State when the defense asked him why he filed a whistleblower lawsuit against the university.

McQueary may have been the witness the defense had the best chance to discredit, but it doesn't seem like they made any significant dents in the prosecution's case. Even if they had damaged McQueary, I'm not sure how much it would matter, at least not to the overall case against Sandusky. We've already had compelling testimony from two alleged victims with six more waiting in the wings. If those six are anything like the first two, Sandusky is going to have a hard time mounting any kind of credible defense. So far, Amendola still says there's a chance that Sandusky could testify in his own defense but, based on earlier interviews Sandusky did, putting him on the stand doesn't seem like a good move. Star defense attorney Alan Dershowitz is not impressed.

So, we're back to the question of will the defense cut a deal and, if so, when will they do it? The longer this goes on, obviously, the less likely there is to be a plea. My belief is that a plea is Sandusky's only chance to get out of prison before he dies. On the other hand, a plea doesn't guarantee that, so maybe, as the defense, you just play it out until the very end. I think it's a tough call for Sandusky's attorneys. They have to know that they're losing, but Sandusky himself doesn't seem to think he did anything wrong. If compelling testimony from two (or more) alleged victims doesn't change Sandusky's mind, what chance do his attorneys have?

There are no comments to this entry.